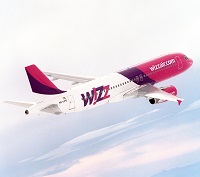 On 27 November Wizz Air Ukraine announced a new route to be operated on an Airbus A320 from its new base in Lviv in 2014.

The route will connect Lviv with the Israeli capital Tel Aviv and will be flown on Tuesdays, Thursday and Saturdays from 1 May.  It is hoped it will provide a total of over 56,000 seats in the first year of operations.

This latest destination is the ninth Wizz route to be flown from Lviv and the airline now serves five countries from the airfield.

"It has been a bit more than a month since we’ve announced the third base for Wizz Air Ukraine opening in Lviv on April 20, 2014”, said the airline’s General Director, Ákos Bús.  “Today I am thrilled to add one more new route that will be operated from this base.  We hope that Lviv will benefit from the inflow of tourists from Israel, which would stimulate job creation in tourism and hospitality sectors.  On the other hand we are also confident that Lviv consumers will appreciate visiting beautiful Tel Aviv all year round and that it becomes popular to book a long weekend [away] in this friendly and warm city.”
www.wizzair.com