To a people of a certain generation Britannia means the Royal Yacht, Her Majesty the Queen’s favourite holiday retreat from 1954 until 1997.  Today she is in secure retirement, one of Edinburgh’s most popular tourist attractions, tied up in the port of Leith.

P&O Cruises has, somewhat controversially it must be said, announced that its new 141,000 tonnes cruise ship, scheduled to enter service in spring 2015, will also be named Britannia.  There is plenty of precedent.  Queen Elizabeth was the name of a battleship that served in both World Wars and is also the title of the new aircraft carrier (which can be seen emerging on the skyline from Britannia, across the Firth of Forth at Rosyth).  The first QE liner and the battleship were both at sea at the same time.  There have been two previous ships named Britannia connected to the company. The first entered service in 1835 for the General Steam Navigation Company, which went on to become The Peninsular Steam Navigation Company.  The second, which dates from 1887, was one of four ships ordered by the company to mark the Golden Jubilee of both Queen Victoria and P&O itself.

Speaking at the London unveiling of the new ship P&O Cruises & Carnival UK Chief Executive Officer, David Dingle, said: “Britannia is a most fitting name for the newest addition to P&O Cruises, which, with its long and famous heritage, remains Britain’s favourite cruise line. Britannia will capture both the contemporary spirit of P&O Cruises and the spirit of Britain today.

“Britannia will underpin P&O Cruises unique commitment to building ships specifically designed to anticipate the tastes of today’s Britain.  It will be a modern classic, a ship for this and future generations offering authentic travel by sea in an enduringly contemporary setting”.

Whilst we have not yet reached the end of the year there is no doubt that the UK river cruise market has grown strongly towards the 150,000-passenger mark during 2013.  Bear in mind that the average canal/river cruiser has a capacity of a lot less than 200 compared with at least 1,000 (and often a great deal more) for ocean cruise ships.  The large looking three-deck Volga river vessels offer just over 100 twin cabins and the biggest Yangtze vessel accommodates around 250 souls.

Whilst more often than not the cuisine is excellent and varied, and regional specialities produced, there is normally just one restaurant.  The cabins for the most part are adequate rather than spacious and bathtubs are rare, although wi-fi usually comes for free.  River cruising is educational rather than restful, and if you want to stay on your boat all day whilst your travelling companions are off on a tour that is part of the package that is entirely up to you.  If the weather is fine the spacious top decks are very welcoming.  The rivers and waterways are smooth and the whole experience is of casual informality.

The Rhine/Danube and Dutch waterways provide for half the river cruise business with the French rivers about 10%.  The once mighty Nile market has collapsed and it will need years of peace for the business to return.  The Russian experience continues to grow as does the Far East.

This year around 15 new river craft arrived including 10 for Viking, the largest operator.

For 2014 there is a new kid on the block – Emerald Waterways – which calls itself “The Deluxe River Cruise Company”.  Readers should bear in mind that with the main European river navigation the vessel must be less than 445ft long and 38ft wide.

Whatever the boat (you can’t really call them ships) it has to fit that template giving that the vessels, regardless of the operator, are much the same, as far as it goes with cabins and public areas.

River cruise companies have up to now offered more or less the same, and for the most part, of a high quality.

Emerald is changing the scenario.  Most river cruisers offer what are known as French Balconies, not balconies at all but a metal grill protruding from the sliding cabin window offering the semblance of a balcony.  What Emerald has done is taken some of the cabin space and built what it calls “an indoor balcony with with-open air system”.  On paper it looks very attractive.  In another innovative move on one deck it has moved the internal corridor to give more room in suites that are over twice the size of the standard cabin.  They are very spacious and equal to that in sea going ships.

With Emerald the “pièce de résistance” is an area at the rear of the vessel that in the daytime is a small indoor pool with retractable roof, at night converting to an intimate cinema or lecture room.  We are promised outstanding dining and an area in the bow for alfresco dining.  If that is not enough Emerald’s boats will have a putting green too; plus a fitness area and a massage therapy room.

Viking River Cruises was founded by Norwegian born Torstein Hagen in 1997 and has over the years become the world's leading river cruise line, operating a fleet of 41 vessels on the waterways of Europe, Russia, Ukraine, China, South-east Asia and Egypt.  It is a quality product and in 2013 introduced no less than 10 news ships.

Perhaps not surprisingly it is now expanding into the deep sea cruise business offering the same high standard that has become synonymous with the river product. 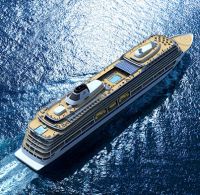 Under construction at Italy’s Fincantieri shipyard, one of the world’s most experienced cruise ship builders is Viking Star, 47,000 tonnes and 930 passengers.  She debuts at Bergen in April 2015 and is clearly aimed at the market currently the preserve of Crystal, Silversea, Regent and Oceania, a sophisticated cruise liner with every amenity you would expect.  Viking has an advantage over previous newcomers with a large base of satisfied customers.  CEO Torstein Hagen has sat on the board of Holland America and also Kloster Cruises, which became part of 6-star line Seabourn. He knows the business.

Mr Hagen chose to announce his plans in the suitably plush surroundings of LA’s Beverly Hilton Hotel, taking a swipe at some of his competitors when he said: “In the race to build bigger ships, many cruise lines have lost sight of the destinations to which they sail.

"With our new ocean cruises, we are applying the same principles behind our award-winning river cruises to our itinerary and ship design; privileged access excursions and on-board experiences”.  www.viking.com