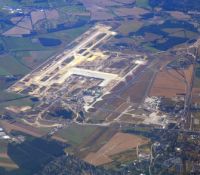 Brandenburg International, Berlin's long-delayed new airport, still without an opening date, will cost more than expected, a member of its supervisory board has said.  Noise insulation and the large terminal building were driving costs beyond the expected €4.3bn, Bretschneider told German broadcaster ZDF, and additional levies were payable for every month the airport remains closed.

"I still believe the airport will be able to cover its costs, but not as swiftly as thought", he said.

Within the same site Schönefeld Airport still functions as a Berlin Gateway mainly for low-cost operators including Condor, easyJet, Norwegian and Ryanair, with the advantage over Tegel, the current main international airport, of having good rail links to the city centre.  The closure of Tempelhof, the city centre airport, now looks more and more premature.  www.berlin-airport.de/en