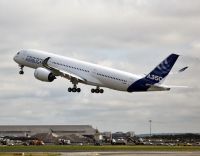 Expert opinion is that the A350 will make its full public debut at the opening day of the Paris Air Show today, with at least one simple pass down the flight line at an agreed height.  Actual flight time between Toulouse and Le Bourget is less than one hour with a sortie to the show well within the scope of the flight test programme and not putting any pressures on the certification schedule.

The A350 XWB is an all-new mid-size long range plane currently comprising three versions and seating between 270 and 350 passengers in a three-class layout.

This maiden flight marks the beginning of a rigorous test flight campaign involving five A350s, and around 2,500 flight hours.  It will culminate in the aircraft’s certification followed by its entry into airline service in the second half of 2014 with first operator Qatar Airways.  To date the A350 XWB has won 613 firm orders from 33 customers worldwide. www.airbus.com  www.rolls-royce.com