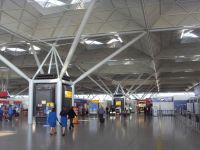 Stansted’s new management, M.A.G. (Manchester Airport Group), now into its sixth week of ownership, has been quick to reinvigorate what had become a lethargic operation under the previous Heathrow (BAA) control.  There is undoubtedly a newfound buzz with previous Manchester Airport Managing Director Andrew Harrison firmly in charge and hands-on.  Even the much criticised Stansted Express, which represents 25% of the airport's 17.5m 2012 passengers, seems to be improving with reliability, the latest rolling stock including UK three-pin electric plugs in both classes and free wi-fi.

Stansted currently only has 14 resident airlines operating to 150 destinations as against Manchester’s 80 carriers and 200 places.  It is profitable to the extent of £40m last year with 50% of the passengers originating overseas.  Once 2013 is out of the way (where it is hoped the freefall in numbers will level out), Stansted expects to add around one million per year.  Much depends on attracting new carriers, including long haul, building on Mr Harrison's experience at Manchester where Etihad, Emirates, Qatar Airways and Singapore Airlines are well established.

Over the coming months visitors to the airport will see some dramatic changes under a £50m two-year refurbishment scheme including the enlargement of the airside area, and a new and much bigger security search. www.stanstedairport.com