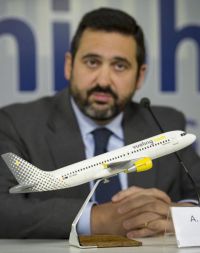 The board of Barcelona-based Spanish airline Vueling has unanimously recommended shareholders accept an improved takeover offer of €9.25 (US$12.10) per share from IAG.

Vueling was initially created in 2004 and in 2009 was the successful target of a reverse takeover by Click, a competing low-cost carrier which had begun services in 2006.  Click had been created by American educated Spanish national Alex Cruz who took over the same position with Vueling and remains in charge.

In March Vueling announced increased passenger traffic by 3.6% year on year and obtained a load factor of 80.2%, 1.7 points higher than the same period last year.  The traffic figures have been negatively impacted by the strike of Iberia handling and maintenance services.  This situation has forced Vueling to cancel 318 flights, which represents 4% of the total scheduled flights.

IAG says that it does not expect any Vueling management changes.  Luis Gallego, the former Chief Operating Officer at Vueling is now CEO of Iberia.  Last year he formed Iberia Express as part of IAG and based that carrier in Madrid.  In May 1998 British Airways, then independent, created GO in an attempt to form a low-cost offspring but this was a failure.  The airline was sold off to easyJet in 2007. www.iag.com www.vueling.com