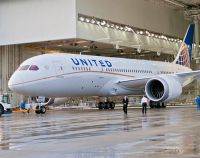 United Airlines was in a positive mood last week and said that it planned to begin flying Boeing's 787 Dreamliner five days sooner than previously expected, a sign of confidence in the jet's return to service after regulators grounded it in January over safety concerns.

United said it expected to use the 787 on its Denver – Houston route starting 31 May and on the Denver – Tokyo Narita route beginning 10 June.  What happens if Boeing does not meet the schedule is unclear.

Other operators are not so clear with LOT Polish Airways indicating it would not fly the aircraft until October.  Japan's All Nippon Airways, the largest 787 operator, said late last month that it also was taking reservations for flights on the 787 for June, but might decide to use a different aircraft.  There is no firm commitment on the plane type. www.boeing.com/commercial