The Editor of Business Travel News sent the following words to the letter page of The Times and received an acknowledgement.  It was not published.

Either the newspaper did not wish it to be seen that it had made a fundamental mistake, or that The Times is not offering a balanced view on the air capacity problem.  It is about time that questions are asked of news editors (and picture editors) who use unrepresentative images.

Sadly readers will waste their time trying to find the picture on The Times website.  It has been removed and a different image substituted.

Surely it is about time that the standards suggested in the Leveson Enquiry be more rigorously extended to Picture Editors.

The imagery in the Times today (Friday December 14 page 61) which shows a British Airways 737 (which is no longer in their fleet) flying under telegraph wires over some houses is clearly made up.  It is a complete fabrication and totally misleading.

The Times is not the only perpetrator of such nonsense.  Time and time again we see BBC flashing up a picture of a Virgin Atlantic Airbus A340 impossibly flying about 50ft over a housing estate.  Images in newspapers should not be doctored and a careful watch be made over the use of special lenses which give a distorted view of any incident.

It is also my view that those interviewed regarding noise problems should clearly state where they live and when they moved there, and if they use the airport.  A recent BBC report questioned a person living in Bermondsey, East London, who claimed that the modern, quiet, aircraft flying 5,000ft above him were causing a nuisance”.

It also could be held that Getty Pictures, who hold the copyright for the Virgin picture, are guilty of publishing misleading images for their own financial gain.  The use of long focus lenses to shorten distances is nothing new.  But is it ethically correct?  In this instance the aircraft was some distance from the houses and not over them.

Is anyone brave enough to take on The Times or Getty Pictures?  Perhaps another National newspaper might consider the Business Travel News comments?  Should advertising be withdrawn from publications who publish seemingly fraudulent pictures.  Perhaps Part 2 of the Leveson Enquiry could take up the ethics of the picture desks. 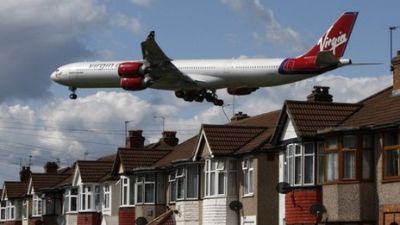