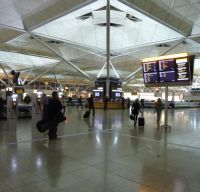 According to what are clearly confused leaks to both The Telegraph and The Sunday Times, the sale of Stansted Airport is between Manchester Airport and backers, and Malaysia Airports, with final bids due Wednesday (16 January).  Both Ferrovial, the present owner, and the City, are obviously keen to push the price up as high as possible .

A bidding group led by investment manager Morrison & Co, which operates out of New Zealand, Australia and Hong Kong, appears to have dropped out after failing to secure bank finance for its offer, citing the potential risks of a regulated airport dominated by Ryanair with 70% of the traffic.  Passenger throughput has dived over the last three years from 24m in 2007 to 17.4m in 2012.

Little investment is required at the present time but if the Davies Report were to suggest a second runway this can change overnight.  The backing of present London Mayor Boris Johnson is probably secure.  The airport has reasonable road links but suffers from a poor (cheap at the time) rail link to central London which can only be improved with some kind of high-speed service. www.stanstedairport.com