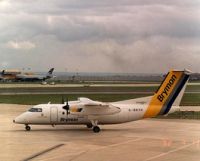 A recent meeting of Plymouth City Council confirmed that the now closed Roborough Airport cannot be built upon until at least 2021 in spite of attempts by property developer Sutton Harbour Plc (and former Air South West – ASW owner) to move ahead with planning permission.

The once thriving airport (in the late 1980s Brymon Airways operated up to five flights daily to Heathrow) in many ways reflects the downhill woes of the largest city in the South West (population 200,000), with very poor surface communications to London.  Unemployment is high with a large proportion of government jobs and the soccer team could easily slide out of the Football League.

Plymouth Airport suffers from a 450ft elevation and 1160ft runway length which limits full capacity operations by such aircraft as the Avro/BAe 146 series and Embraer 170.

A group called Viable has been created with plans to develop the site (but failed to respond to enquiries by BTN).  Plymouth and its airport requires a link to London which could be provided by ring-fencing a third runway at Heathrow, or opening up Northolt.  The Gatwick route was ruined with the decision of the Competition Commission to allow Flybe into Newquay airport destroying ASW, and with resultant fare increases. www.viable.org.uk