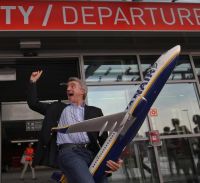 Ryanair, that most righteous of airlines that can do no wrong, according to its management, is in hot water once again, having left around 20 passengers behind from a recent flight from Warsaw (Chopin) Airport to Manchester.

Not even allegedly.  The seething travellers were dumped at an airport they were not even supposed to be in.

Last summer, timed just before the European Football Championship, Warsaw opened a new airport, Modlin, specifically for budget carriers.  On 22 December it closed for 737 size aircraft for what is described as “safety work”.  Ryanair does not go back to Chopin until 22 January at the earliest.

The trouble is that the Chopin slots do not tie in with Ryanair’s schedule.  According to the airline ‘planes need to be away as per the Modlin timings and not the slightly later Chopin.  If the slot is available the flight closes up and goes regardless of the times shown on the departure board.

Ryanair communications chief Stephen McNamara said: “Warsaw Airport is responsible for the accuracy of the information displayed on its customer service screens and it is each passenger's personal responsibility to ensure they are at the departure gate before final boarding, the time of which is advised on their boarding card”. www.ryanair.com