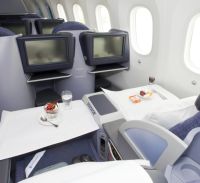 The Boeing 787 was quietly introduced by United Airlines on Thursday 3 January with an 11hr 7min inugural between Los Angeles and Tokyo Narita.  Flight UA 32 has performed well to date (one service cancelled) with the quickest journey just under 11 hours,  much in line with the replaced 777 services.

With six aircraft delivered the airline is expected to introduce the Dreamliner on one of its twice daily Heathrow – Houston services from 2 March until the start of the summer schedule at the end of the month.  Just a week earlier the Chicago-based carrier plans to inaugurate Amsterdam from Houston, originally planned for December.  Lagos, also from the Texas hub, will come on-line around the same time.