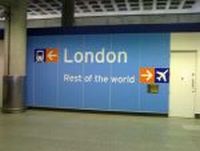 STANSTED AIRPORT seems to be reeling with passenger numbers down 18.5% for May and a public enquiry for a second runway yet again delayed.  John Denham, the current Secretary of State for Communities and Local Government, has written to all parties saying essentially that with the whole question of BAA airport ownership under appeal “it was neither feasible nor realistic to announce the start date for the Stansted G2 public enquiry until such time as the outcome of the appeal is known”.  This could take as long as nine months.  In the meantime the Stop Stansted Expansion (SSE) appeal to the High Court in relation to the 'G1' expansion of the airport, which will see ten million extra travellers a year, has been thrown out opening up a growth to a potential 35m annual passengers passing through the airport at some point in the next decade. www.stanstedairport.com