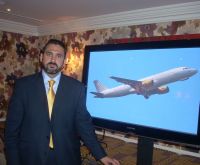 VUELING, the Spanish airline, will at some point in July become Heathrow’s latest resident.  It will fly to Bilbao, La Coruna, Seville and Vigo as the carrier completes a union with Clickair, which will disappear.  CEO of the combined airline is Alex Cruz, who created Clickair in 2006 with the backing of Iberia, the owner of 45% of the merged carrier.  At a very comprehensive briefing in London last week Mr Cruz pointed out that Vueling will be the only true ‘low fare’ airline operating out of Heathrow and emphasised its independence from the Spanish national airline.  At this stage joining oneworld was not planned.  With both companies reducing their fleets and commitments over the last year or so the combined operation will finish up with 35 Airbus A320s and 90 routes.  The closing of the Clickair head office in Barcelona and other efficiencies will reduce the overall work force by 250 to around 1,350.  Vueling expects to carry 11m passengers this year, a little more than bmi and nearly twice Flybe.  About 30% will be flying on business. www.vueling.com