Ryanair to become the 'carry-on' airline? 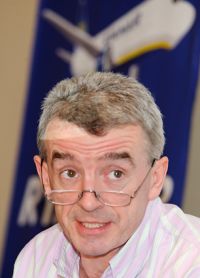 RYANAIR passengers might have to carry their own bags to the aircraft’s steps.  Airline CEO Michael O’Leary promoted this most bizarre idea last week, perhaps forgetting that carry-on baggage has to meet certain size standards.  The idea of the elderly lagging their suitcases through security, across the departure lounge, along a corridor and then down the steps to the tarmac, is simply ludicrous.  He said passengers could watch their luggage being loaded onto the aircraft – which conjures up the sight of passengers milling around the tarmac as if they were on a coach trip and refusing to board the plane until the luggage went into the hold.  He also indicated that he was thinking about removing restrooms (adding seats), leaving a single washroom on a 180-seat passenger aircraft.  The Ryanair press release talking about the baggage requirements has not been added to the airline’s usually comprehensive web site. www.ryanair.com