Air Berlin and the US 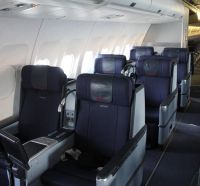 oneworld member Air Berlin (AB) is restructuring its US operation for summer 2013.  The airline’s North American operations are run by Titus Johnson, formerly based in London.  Dropped are flights from Dusseldorf to Las Vegas, San Francisco and Vancouver.

From Berlin (Tegel for the time being) the Miami service jumps from three to five flights per week.  At Dusseldorf, Los Angeles increases from three to four weekly, Miami goes daily and the New York JFK flights step up from daily to 10 weekly.  Two-class Airbus A330s are used on the routes.

Air Berlin is now Germany's second largest airline and the sixth in Europe in terms of passenger numbers.  It is partly owned by Etihad.  AB is in an argument with Berlin Airports Authority regarding compensation for the late opening of Brandenburg Willie Brant International Airport (the new Schönefeld), for which a date has still not been set. www.airberlin.com  www.airberlin.com