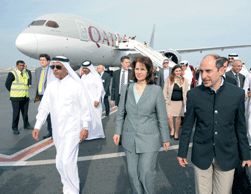 Qatar Airways has finally celebrated the arrival of the airline's first Boeing 787 Dreamliner, one of 30 on firm order, after one of the longest aircraft gestations in airline history, the initial commitment made in November 2007.  It had already signed up for Airbus A350.  However the lead A350 is unlikely to arrive before late 2014 but nobody is putting any bets on the schedule.

The Qatar Airways 787 was first shown to the airline industry at Farnborough last June, prior to final completion, and received unanimous approval.

The composite aircraft should provide unprecedented fuel economy and low operating costs.  The 787 features a host of new technologies and cabin features in what will undoubtedly prove to be an award winning Business Class.  All passengers will experience cabin environment improvements including LED lighting, bigger windows, larger overhead bins, lower cabin altitude and enhanced ventilation systems.  The airline's 787 cabins are configured with 22 seats in Business Class and 232 in Economy.

The first aircraft has arrived in Doha and will be used for training and route proving flights in the Gulf region before joining the airline’s five times daily London service, which could be as early as 1 December.