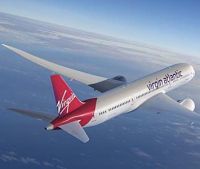 AIRBUS has signed a contract with Virgin Atlantic which will add ten A330 aircraft to the fleet.  Due to late delivery of 15 Boeing 787s on order these will be the first twin-engined aircraft flown by Sir Richard Branson’s airline, an indication of how engine technology and reliability has moved on since the entrepreneur’s '4 Engines 4 Long Haul' campaign knocking 'twin' operations.  Integrating the new aircraft into the fleet should prove no problem, the sister A340 flown by the airline since 2002, although with reputed introduction problems.  With no new routes announced it is thought that the A330s will replace most of the airline’s Boeing 747s.  A very large question mark remains regarding an order for six Airbus A380s.  A cancellation, or 'wait and see' deal could be part of the A330 package. www.airbus.com