Nuremburg to the UK 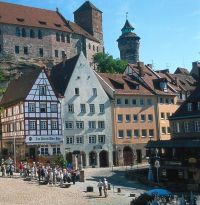 The fascinating historical Bavarian city of Nuremburg sited on the Rhine-Danube canal is to lose its Gatwick route straight into the New Year but gains a twice daily London City operation.

Air Berlin will drop its daily service from 7 January to be effectively replaced on Sunday 27 January by CityJet from the East London airport with a service that operates twice daily Monday to Friday, with an outbound from Nuremburg on Saturday morning returning Sunday evening.

Says Christine Ourmières, CEO, CityJet: “Nuremberg is a key business hub in Europe given its position as the capital of Germany’s industrial heartland.  It is the head office location for many of Germany’s multi-nationals such as Siemens, Puma and Adidas and it plays host to several international trade fairs.  Taking its business and leisure credentials together, it was a clear cut decision for CityJet to launch a new year-round service to Nuremberg, further extending our network into Germany, following the launch of Münster – Osnabrück this Monday 29 October”.  www.cityjet.com