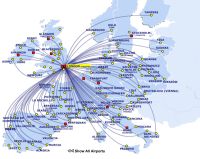 BAA Ltd, which is in the process of selling Stansted following a ruling by the Competition Commission, said the airport handled 1.64m passengers during September, 4% down on the same month a year earlier.  On a 12-month rolling basis the figure is now 17.39m, down 4.8%.

In the same period 6.35m passengers passed through Heathrow, a record for September and up 0.6% on the same month last year.

BAA Chief Executive, Colin Matthews, said: “Heathrow saw record passenger numbers in September.  Traffic to and from the BRIC economies, other than India, demonstrates the on-going importance of hub capacity to connect the UK to growth markets.  The Davies Commission must rigorously and objectively assess every option to meet our country’s economic needs”.

Ryanair is easily the largest operator at Stansted with about 80% of the market.

Spokesman Stephen McNamara said that he hoped that the new owner of the airport would significantly slash prices in order to stimulate rapid traffic growth.  “Unless Stansted’s charges are substantially reduced, it is inevitable that the BAA’s five-year record of traffic declines will continue”.  He also said that the BAA was over valuing Stansted and any inflated price would have to be borne by the resident airlines and their passengers,  www.baa.co.uk