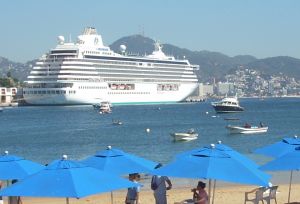 In July 1990 a cruise line was introduced that set completely new standards concerning water-borne holidays.  Up until that time if you wanted the ultimate in luxury on a sea going trip you either booked a suite on a multi-class liner such as the now taken out of service QE II, or went for a small exclusive vessel that lacked the facilities of a big ship.

Crystal Cruises was the new kid on the block and has been winning awards ever since.  Like a fine wine it has matured over the years.  It is different and continues that way.  Crystal Cruises is part of NYK, Japanese, and one of the world’s largest shipping companies.  However it is run as an entirely American operation, based in Los Angeles and only offers two ships, Crystal Symphony and Crystal Serenity. 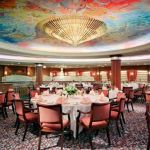 Symphony and Serenity are big liners by any stretch of the imagination, 50,000 tons (plus) each, around 1,000 passengers and 650 crew.  Even those in the cheapest cabins live the life of six-star extravagance with virtually every possible luxury available.  The nightly shows in the theatre are at least the equal of London’s West End with regular appearances by international stars in that venue and also in the equally comfortable nightclub.  The cuisine in one of four restaurants is superb and nothing seems too much for the willing staff to accommodate.  In August Symphony visits Dover prior to circumnavigating the UK calling at Edinburgh, Belfast, Liverpool, Dublin, Waterford and Guernsey.  Have a word with your travel agent.  He may well be able to arrange a short visit.  Crystal Serenity is based in the Mediterranean this summer prior to a southern transatlantic transit to the Caribbean in November.

Serenity is the slightly larger of the two.  It has recently undertaken a multi-million dollar re-modelling including a redesigned atrium area in the centre of the ship and a revised casino. 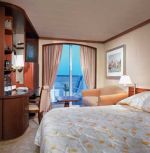 There are 32 even larger penthouse suites and four extremely lavish 1,345sq ft master suites.  All standard cabins have a bath and offer 226sq ft of luxury accommodation.

What do you get on a cruise with Crystal?  Firstly no big unexpected bills to settle at the end of the cruise, all those niggling little items that some companies now add, copying perhaps Ryanair, well known for its hidden extras.  Even the bus ride from the ship to town at each port is charged by some.  True you have to pay for wines and spirits but soft drinks come courtesy of Crystal to all passengers, as does ice cream and a proper 24-hour room service.  There is a champagne reception at the start and finish of every cruise.  Yes you are billed for services in the magnificent spa but the computer, bridge, golf, electric organ and other courses on sea days are for the most part gratis and included in the package.  The lecture courses are most compelling and the purpose-built cinema offers the latest releases.  The gym is one of the best at sea on any size of ship.

Both ships feature a sliding roof over one of the two swimming pools which in practice stays shut the whole time.  This means that the ship offers an air conditioned aquatic area for lunchtime poolside buffets which in the evening becomes available for al fresco dining.  Or you can go outside!

Even the two specialist eateries (one Italian and one Far Eastern) only add a very nominal USD7 per person gratuity for some of the finest meals possible at sea (or land).  Crystal is not cheap, and refuses going for a policy of major discounts for the less than popular voyages.  It is more discrete.  This means that the ships are never crowded and the very high standards can be maintained.

Towards the year’s end Symphony visits amongst many unique places in South America The Amazon, Rio de Janeiro, Buenos Aires, Port Stanley and Ushuaia.  Prior to that it will be based in New York taking in Bar Harbor, St Johns, Quebec and Montreal.  At the same time Serenity will make several passages of the Panama Canal, fascinating in itself, passengers joining in either Miami or Costa Rica.

Crystal, at least in Europe and the Caribbean, tries to aim for one day at sea and one day in port.  That way you benefit from restful days on the ocean and an opportunity to visit out of the way places which might not have normally been on your agenda.  The land packages are reasonably priced.  There is no service charge for UK originating passengers. www.crystalcruises.com

Cruising is a complicated business.  For an introduction visit www.aerbt/crusing intro

CHINESE FOOD addicts, those with reasonable pockets, might like to join Crystal Serenity in Venice from 28 July where for 12 days Master Chef Nobuyuki ‘Nobu’ Matsuhisa will be creating a series of unique menus.  The famed restaurateur is demonstrating his culinary techniques and providing a glimpse into the genius and warmth behind his dishes.  The 12-night voyage starts with an overnight in Venice on 28 July and visits Ravenna, Corfu, Rhodes, Bodrum, Mykonos and Istanbul (overnight) before finishing in Athens on 9 August.  Prices start from UKP4,285 per person including return scheduled flights, transfers, and UKD1,000 per person shipboard credit. www.crystalcruises.com

MEIN SCHIFF (My Ship), the first ship in the new TUI Cruises fleet, has been named in Hamburg in a celebration that marked a significant step for the joint venture between Royal Caribbean Cruises Ltd and TUI AG.  The new brand is designed to serve the German cruise market, where some 906,000 Germans took cruises in 2008, and where that number is forecast to increase by 11% in 2009.  The 1,914-guest Mein Schiff was formerly Celebrity Cruises’ Celebrity Galaxy. www.tuicruises.com

STAR CLIPPERS has added 40 maiden calls to its 2010 and 2011 sailing itineraries, including some of the world’s most remote islands, an ecologically preserved archipelago and lesser known ports and islands in Europe and Central America.  The new sailing itineraries are on board the four-mast Star Clipper, its twin ship Star Flyer and on Royal Clipper, the tallest full sail ship in the world.  New Star Clippers destinations include the Marquesas Islands in the open Pacific, (the furthest islands from any land mass in the world), the ecologically preserved islands of the Mergui Archipelago (Burma) and a number of lesser known European ports, including Sanary-sur-Mer (Provence, France). www.starclippers.co.uk

VIKING has completed a major remodelling of Kirov, one of the four ships used on its St Petersburg to Moscow programme.  Reputed to cost USD6m the work was handled by a Russian shipyard unlike the previous year when sister ship Surkov was upgraded in Finland.  Essentially the 35-year old vessel, originally build in East Germany was gutted.  Although looking somewhat severe externally once inside it is as modern as can be with full air conditioning, a comprehensive video and film presentation unit and very nicely presented bars and dining room.  All the cabins have internet facilities, flat screen TVs, fridge and safe. There is an elevator too.  For the 2009 season English speaking Filipinos have been recruited for the resturant service. www.vikingrivercruises.com

BE WARNED ABOUT THE SERVICE, but it is bound to be terrific as it is Silversea.  The fly in the ointment is that John Cleese, him of ‘Fawlty Towers’ fame, Monty Python and the voice over in Spamalot, is joining Silver Spirit on its inaugural voyage at Buenos Aires for the Santiago portion, starting 20 February 2010.  As long as he sticks to entertaining and does not try to organise the Cruise Director all will be OK. www.silversea.com