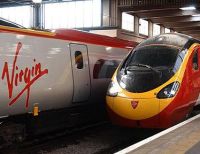 In spite of a guarded response by current Transport Minister Justine Greening no contract has been signed regarding the future of the West Coast Main Line rail services.  Quite what that will happen next is unclear due to legal restraints.

The current holder, Virgin Trains, offered a furious reaction when it was announced last month that for the next 14 years First Group would operate the franchise. See BTN 20 August

In a statement Virgin Trains said that it was “left with no choice but to commence Court proceedings as we believe the procurement process has ignored the substantial risks to taxpayers and customers of delivering FirstGroup's bid over the course of the franchise”.

For its part First Group was equally emphatic.

"We have every confidence in the Department for Transport's process, which is rigorous, detailed and fair and in which bids are thoroughly tested", the company said.

"There has been no complaint about the process, which was carefully described in advance, until Virgin Rail Group had lost commercially".

It is an interesting battle between a one interest operator (Virgin) and an operation that already controls much of the UK’s train infrastructure (First Group). www.virgintrains.co.uk www.firstgroup.com/uktrain