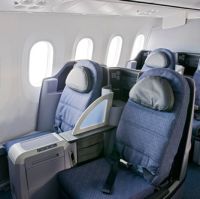 Following the announcement of its international plans for the Boeing 787 Dreamliner, commencing Amsterdam 4 December, United Airlines has now published details of the domestic introduction.  As the initial aircraft are inducted into the fleet, they will be based at United’s Houston hub.

The first aircraft is due late September with the second in October and two more in November and a final one this year in December.  There will be initial proving/validation flights and training activities that allow United to meet FAA certification requirements.

The first planned service will be between Houston and Chicago on 4 November followed by Newark, San Francesco and Los Angeles the same day.  There will be up to six flights per week for each city pair.  Be prepared for special preview services to be displayed on United’s website during October.  There is likely to be little warning. www.united.com