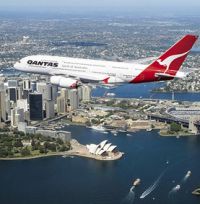 Australia's struggling flag carrier Qantas Airways has reported its first loss since privatisation in 1994, US$256m.  The airline has also cancelled a firm order for 35 Boeing 787-9s, with the first due in 2014.  In fact this is not as drastic as it would appear, Qantas bringing forward options on a further 50 aircraft, with the initial delivery set for 2016, in effect a two-year delay.

Orders for 15 Boeing 787-8s destined to be delivered from 2013 to Jetstar remain unchanged, enabling the transfer of Jetstar’s A330s to Qantas Domestic and the phased retirement of Qantas’ 767 fleet.

The share of international passengers Qantas flies in and out of Australia has been in a long time decline due to competition from Gulf and Asian carriers and this dropped further to 18.4% in May from 19.2% according to Government figures.

In contrast, Singapore Airlines and Emirates both boosted their share, with the Singapore carrier's slice of the pie expanding to 9.4% from 8.8%.

Whilst for the most part doing well, Qantas is facing increasing competition on domestic routes from Virgin Australia, which is benefiting from alliances with Middle East airline Etihad, Singapore Airlines, Air New Zealand and Delta. www.qantas.com