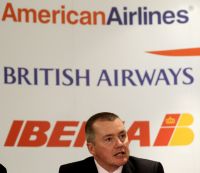 Currently trading in Chapter 11, American Airlines has been sounding out a possible merger with US Airways.  US has limited North Atlantic services from Philadelphia and Charlotte and was created by a reverse take-over by America West, which still operates the rump of the routes.  It is also a member of Star Alliance.

The possibility has been welcomed by Willie Walsh, CEO of International Airlines Group (IAG) during a speech hosted by the Washington International Aviation Club.

"I've never been concerned when people have talked about this as representing a potential threat to oneworld or IAG", Walsh told reporters.

Walsh said a merger with another airline will be inevitable for American.

"There will be consolidation – that's my view.  Whether its US Airways and American together, I don't know," he said.

Unlike other possible partners, the US Airways network "complements" the American network, Walsh added. www.aa.com www.usairways.com