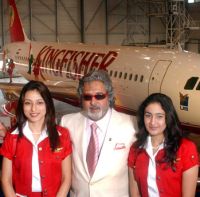 India's Kingfisher Airlines staggers on in spite of reducing its daily operations from 340 flights to around 120.  The London service has gone but at least the staff now appear to have been paid from last month.  However the Indian tax authorities are chasing for what they claim is a major outstanding debt.

The cancellation of flights has prompted the airline’s owner, VJ Mallya, who also controls the beer company of the same name, to state that the airline's fortunes may not improve in the near future.

"Damaging the future of Kingfisher in the public eyes is not going to produce cash", Mr Mallya said in an open letter to employees.

"This only makes my recapitalisation efforts more difficult by causing concern and apprehension among our potential investors".

Kingfisher saw its share of the Indian market fall to the lowest of any airline in April.  It held the second-biggest market share in October last year.

Kingfisher has never made a profit since it was launched in 2005. www.flykingfisher.com