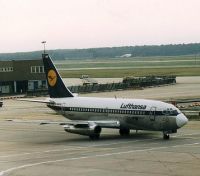 With Farnborough out of the way, Boeing has been able to announce that probably sometime in 2018 the 10,000th 737 will be produced.

Lufthansa was the launch customer in 1965, quickly followed by United Airlines and it was in that order that the carriers took delivery of their first aircraft in December 1967 (LH) and April 1968 (UA).  Rather like the DC3 (of which 12,500 were built) the 737’s early days were ‘tricky’.  In 1970, with an order vacuum, Boeing considered closing the 737 production-line and selling the design to Japanese aviation companies.

By way of a comparison, only 56 Boeing Stratocruisers found their way into civil use, 244 BAC 1-11s were built, and Vickers Viscount closed at 445 aircraft, a record figure for a jet-powered British commercial aircraft.

Current production of the NG series of two moving lines at Renton near Seattle is 35 units per month rising to 42 by 2014.  By the time that the MAX gets into full flow the number could be as many as 60 monthly. www.boeing.com/commercial