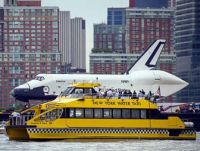 The US Department of Commerce, which is currently very active in its tourist promotion, has announced that 5.4m international visitors travelled to the United States in March 2012.  This is a 14% rise over March last year and the 12th straight month of increases in total US visits.

In March 2012, the top inbound markets continued to be Canada and Mexico. Visits from Canada increased 6% while arrivals from Mexico grew 17%.  All nine top inbound overseas regional markets posted increases in visits with the UK numbers increasing 10% for the year and 29% for March.

Typical of the efforts being made was the arrival last week of the Space Shuttle Enterprise at the USS Intrepid Museum on New York’s Hudson River following the completion of the programme.  It is bound to become a major attraction over the years.  The other three remaining Shuttles have all found good homes, Discovery at the Udvar-Hazy Center, Smithsonian Institution's National Air and Space Museum, Chantilly, Virginia; Atlantis at the Kennedy Space Center, and Endeavour at California Science Center, Los Angeles, California. see ON TOUR www.tinet.ita.doc.gov