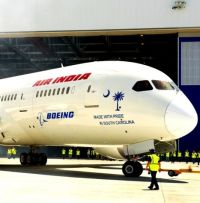 Strange as it may seem it looks very likely that Air India will have the privilege of becoming the first airline to schedule the Boeing 787 into Heathrow.

Ordered back in January 2006, and three years late, Air India expects to take its first three Dreamliners from a 27-plane commitment later this month.  Part of the current delay is a compensation issue, which now seems to have been resolved.

However as BT News goes to press nothing has been actually confirmed regarding delivery, nor an in-service date.  Pilot issues have to be resolved and the aircraft will initially operate domestically.  Qatar Airways could still be the first carrier to inaugurate Heathrow operations.

As of publication date Boeing have assembled around 70 Dreamliners with 11 delivered.  The aircraft are the first to be produced at Charlestown, South Carolina. (see issue 28 May)  www.airindia.com