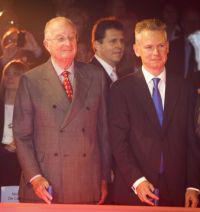 A new rail link connecting Brussels Airport with the high-speed rail network to Amsterdam, Cologne, London and Paris has been inaugurated by King Albert of Belgium.  Previously the station was at the end of the line with up to four services an hour to Brussels North, Brussels Central and Brussels Midi stations.

The new loop will allow high-speed trains to stop at the airport on their way to and from Brussels or Antwerp, giving passengers more flexibility in their travel choices and improving connections between rail and air transport.  By 2015, with the completion of further track work, services to Luxembourg will be introduced.  The airport station is located in the basement of the terminal.

About the same size as Stansted (18m passengers in 2011) the Brussels Airport, also known as Zaventem, has three international standard runways.  It is currently owned by the Australian group Map Airports (75%) and the Belgian State (25%). www.brusselsairport.be