ON TOUR: Luxembourg blink and you'll miss it 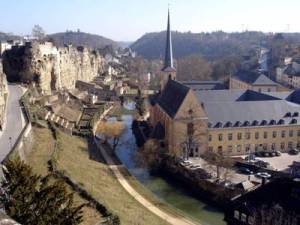 It seemed to be the standing joke about Luxembourg, because it was so small that if you did blink you would miss the country.  However, the Grand Duchy of Luxembourg is celebrating its national day on the 23 June.  As befits a national day there are many ceremonies that mark the occasion, including a torch-light parade and a fire-works display on the evening before.

The royal family will attend the solemn Te Deum before the national celebrations are closed with a military parade and 101 gun salute.

But Luxembourg is not just about an old fashioned little part of Europe, it does have a thriving banking sector.  Yes, Luxembourg was even grey-listed by the G20 in London on 2 April 2009 for being a tax-haven.  But the Luxembourg finance ministry had said in March that it would relax banking secrecy so bankers in the Grand Duchy are perplexed at why the G20 placed them on the grey-list.  Luxembourg does have much more to offer than just banking, there are plentiful restaurants, bars and nightclubs as well as cultural centres too.

A couple of restaurants of the many and varied cuisines on offer Am Tiirmschen in the rue de L’Eau  www.amtiirmschen.lu  caters for all tastes including those who want to eat local and traditional cooking.  The restaurant offers different areas by arches and columns, ancient exposed stonework and ceilings, situated in the old town it can be called a romantics restaurant.  Bella Napoli in the rue de Strasburg is altogether different, modern and stylist décor and of course good wholesome Italian pasta or pizza food, a place where the staff are cheerful and will ensure the customers are cheerful too.

Now the nightlife, just two of the many cafes and bars the town has to offer, the Café de Artistes in monte de Grund is classic French in style not far from the Alzette River and has piano evenings most nights of the week. Zanzen in the rue Notre-Dame is right in the centre of the city, this bar is ideal for after work drinks accompanied with bar snacks and nibbles like cheese, olives and cashews. The bar restaurant has large windows for views out onto the street and has a veranda which is usually full and busy during the summer evenings.

Those searching for culture have many places to visit in Luxembourg, again just a couple.  The Musee D’Histoire de la Ville de Luxembourg in rue du Saint-Espirit www.mhvl.lu  just one of the many places you must visit and if only to see the unique lift, you will discover much history about the town there too.

Then the Grand Theatre in Rond-point Schuman  www.theatres.lu for those who crave dance, theatre and opera.  The theatre was built in the 60s and has a restaurant that opens before and after performances.  It has two auditoria which can be adapted for whatever is being performed.  An outside feature is the water fountain useful to keep cool on those hot summer evenings.

And to finish 21 November 2009 is the centenary of flight in the Grand Duchy, a number of events are taking place during the year to celebrate this including the World Balloon Trophy in Echternach from 29 July to 2 August.