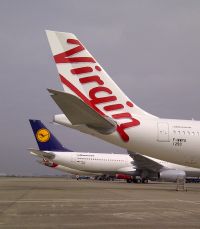 Twelve months after it introduced the first of 10 Airbus A330s into its fleet Virgin Atlantic is about to launch the type with a three-class layout on its premier Heathrow – Kennedy route.  Until now the airline has only been using two-class aircraft on flights to Orlando from Gatwick, Glasgow, and Manchester.  Virgin currently has five New York services out of Heathrow, three to Kennedy and two to Newark.  The new aircraft will be introduced progressively.  According to OAG, 21 April should see the inaugural service.

Virgin Atlantic currently has ten A330-300s on order and says the twinjet will offer a 15% reduction in fuel burn per seat over the A340-300 which it is replacing.

The A330-300 will be introduced on the New Delhi route from 10 July replacing the existing A340-300 on a six times weekly basis.  The type will then be used to resume Virgin Atlantic’s daily flight to Mumbai, which will commence from 28 October 2012.

Its new three-cabin configuration will have seating for 263 passengers, 33 in Upper Class, 45 in Premium Economy and 185 in Economy.  A new 'Upper Class Experience' is being touted as even better than the current 'J' class and the airline has also introduced a new Clubhouse at Kennedy. www.virgin-atlantic.com