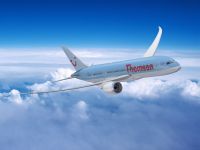 Boeing has announced the latest programme for its 787 Dreamliner world tour which includes visits to Gatwick (25 April), Heathrow (22 and 27 April) and Manchester (23 April) airports.

First port of call will be Heathrow, not its inaugural visit since being introduced into service by ANA late last year, an aircraft diverting from Frankfurt during inclement weather in March.  It was also shown at Farnborough 2010.

Customers, employees, partners, government officials and other stakeholders will be invited to view the aircraft at each location.  There are no general public opportunities.  The tour also includes Oslo (1 May), Taranto (Italy 4 May) and nearer to its base at Seattle, Ronald Reagan Washington National (7 May), Dallas (11 May) and St Louis (14 May).

The Dream Tour aircraft, powered by Rolls-Royce, ZA003, is outfitted with the 787's special cabin features including a welcoming entryway, dramatically larger dimmable windows, bigger bins and dynamic LED lighting.  The aircraft is configured with a luxurious Business Class cabin, an overhead crew rest compartment and an Economy Class section.

To date Boeing has 855 firm orders for the aircraft of which eight have been delivered. www.boeing.com/commercial