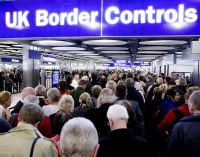 In a very stark press release the Board of Airline Representatives in the UK (BAR UK), calls the latest forecast by the Immigration Services Union that passport queues to enter the UK could regularly extend to three or four hours “a national embarrassment and a serious blow to the UK economy”.

Mike Carrivick, Chief Executive, said: “The efforts of the Border Force to handle peak periods such as bank holidays and the Olympics are well-recognised but cannot be sustained without necessary changes.  The airline community already co-operates by providing advance access to the passport data of approximately 90m travellers each year, all of whom can be checked against a watch list to identify those who pose a threat or who should not be in the UK.”

Carrivick added “Allied to that, airlines would also like to see an increase in the number of smart gates, that permit automated entry through the use of chip-enabled passports, and the re-introduction of smartzones.  Collectively, huge improvements can be made to the queues to enter the UK without compromising the Government’s need for full border controls.  We call upon the Government to speed up entry into the UK by investing now in the technology.” www.bar-uk.org