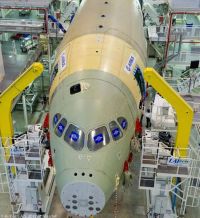 Final assembly of the first A350 XWB is now underway at a brand new final assembly line in Toulouse.  This latest step in the A350 XWB’s progress was achieved as Airbus started joining the 19.7 metre long centre fuselage with the 21 metre long front fuselage.

This initial A350 XWB airframe will be used for the static structural tests that all new aircraft undergo as part of their certification process.  The assembly of the first flying A350 XWB, MSN1, will start during summer.

The A350 will be the first Airbus with both fuselage and wing structures made primarily of carbon fibre-reinforced polymer.  It will carry 270 to 350 passengers in three-class seating, depending on variant.

As seemingly with all new large commercial aircraft programmes the engineers have again proved to be too optimistic with the design schedule.  The A350 was first announced at the Paris Air Show of 2005, Qatar Airways coming in with an order for 60.  As things stand airline service is now anticipated for 2014.  Airbus currently has 561 firm orders. www.airbus.com