FLYING AT THE FRONT END: Vietnam Airlines from Gatwick 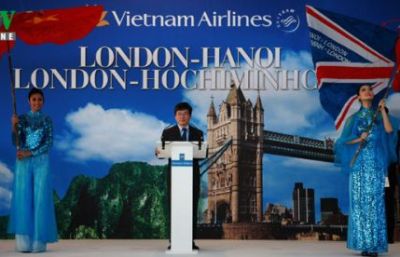 In December 2011 Vietnam was linked for the first time with a non-stop air service to the United Kingdom.  Vietnam Airlines, the national airline, and established in 1996, now flies from Gatwick on

Two days per week to both Ho Chi Min City (Saigon SGN) and Hanoi (HAN).  AERBT would recommend the carrier, but it is in the ‘could do better’ class, the result probably of the Communist management operation under which it is run.

It is price competitive on routes to Melbourne and Sydney which it is marketing heavily.  £700.00 for Economy; £1,410.00 for Economy Deluxe; and £2,785.00 for Business class (all prices inclusive of taxes). With a 21-22 hour flight time (depending on which direction you are going) it is as quick as you can get to Oz, and you can stopover for up to 48 hours without a visa.  Vietnam is a friendly and fascinating country to visit, spotlessly clean.

Whilst its heritage goes back as far as the 1950s, Vietnam Airlines is today a very modern carrier with routes all over South East Asia, to Australia, and in Europe, London joining Frankfurt.  Not only does it codeshare with fellow Skyteam members (Paris for instance with Air France) but also with oneworld’s Cathay Pacific and Qantas.  It markets itself as the airline for Indo China (Cambodia, Laos and Vietnam) and offers connections to most cities in the region.

Vietnam is a one party state and the airline is part of the national transport infrastructure.  The company is overseen by a seven-seat management board, members of which are appointed by the Vietnamese Prime Minister.  It is a fine airline but is deficient in some areas.  Whilst it has the London route to itself it will succeed but if BA or Virgin were to decide that there was sufficient traffic to  compete, it would need to sharpen up. 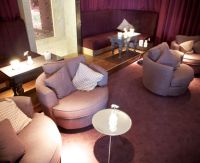 At Gatwick, Vietnam Airlines uses the Number One lounge in the North Terminal, perhaps the best on the whole airport.  The normal gate, 52, is a short walk, but watch the information boards.  It is a silent lounge.

Amenities included in the lounge are a spa, cinema, business centre (courtesy wi-fi) games room and children’s area and there is a complimentary bar (Champagne is charged for).  Also to hand is a pool table. Whilst hot food selection is limited if you want anything more ambitious it can be purchased.  However with the Vietnam departure at noon, and a welcoming meal on board, anything more is not needed.  One advantage is that the lounge is on the ground floor.  A quick visit to the retail area is easy.  If you are in Economy you can pay for the lounge visit, or take out membership.

For reasons of their own at Gatwick Vietnam Airlines boarded Economy Class passengers straight after those with special needs.  Business Class were last, mighty strange as the aircraft used an amidships door, front end passengers turning left.

There is a friendly welcome once on board, a wardrobe is provided, and Heidsieck Champagne plus soft drinks offered.  A good selection of London, International and Vietnamese newspapers are made available plus The Economist, Time and social magazines.  Throughout the 12-hour flight there was always staff around with sandwiches, cakes and fresh fruit available.

The aircraft has a certain vintage feeling to it, offering first generation semi-flat seats in Business Class that are very comfortable but lack storage area.  The deficiencies of the dated cabin system are apparent.  The 10 inch video screen goes into the arm rest and the folding table is a weakness.  Likewise it is a start and go video system.  There is nowhere to store items.  Modern module seats are far better and they do not have to be fully flat.

The meals, outbound, are clearly aimed at a western clientele.  Lunch on the outbound flight starts with hors d'oeuvres, followed by soup, a choice of three entrée courses, cheese, ice cream cakes and fresh fruit to finish.  Coffee and liqueurs.  You can order in advance vegetarian, kosher and other specialised meals.  Breakfast is needed after a long flight and includes an omelette, chicken sausage and mushrooms plus a cold plate.

No air bridges on landing but a private bus is provided for those in Business Class.  Formalities slowed immigration and readers travelling on the route should ensure they have spare passport size prints.  At arrival the staff are helpful and will capture your image.  For $10. 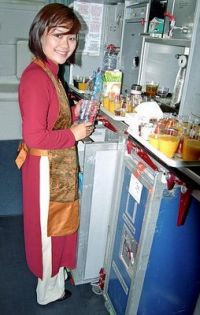 The ‘Orchid’ Business Class lounge is OK but that is all.  With no competition on the route Vietnam Airlines can get away with it but it seems very dated although, just like the terminal itself only just over 4 years old.  There is a selection of uninspiring hot and cold food, and annoyingly, since it sits on an open mezzanine floor below the main terminal complex, open to announcements for both outgoing and incoming aircraft.  Indeed the whole terminal is lacklustre.  A top class international airport architect needs to be brought in.

Where the airline has to reconsider is the Business Class return on-board service.  Take off is around midnight local time with arrival 06:00.  What is on offer is the ‘quick meal’ that some carriers serve as a late night option.  The choice is European or Asian.  The airlines out of Hong Kong offer a full menu selection.  With a 13-hour sector ahead this is needed.  The outbound leg shows that it can be done.  Likewise the breakfast is a cold tray.  There should be no problems with galley space as such a meal is provided inbound to SGN.  No London papers on the return trip, which can be easily organised and would be a nice touch.

Transfer to the aircraft is by bus again with many airbridge gates available.  Business Class passengers get their own mini-coach.  At the other end they are first off, and here Gatwick scores heavily over Heathrow with its many early long haul arrivals.  Vietnam Airlines is just about the first airline to arrive.  Passport control is a doddle.  If you are in the short term parking you can be away within 45 minutes of actually landing.

In summary a fine airline that needs just a little sorting out. www.vietnamair.com.vn www.no1traveller.com