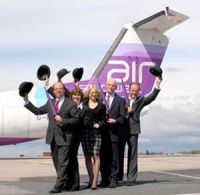 AIR SOUTHWEST, the airline of Cornwall and Devon, is to replace its eye catching WOW three-letter code with ‘SZ’ with immediate effect.  Whilst WOW might be admirable it does not really work in the real international airline business where the IATA two-letter codes are the norm with most global sales systems.  SZ says it will now be able to work more closely with other airlines in the future.  The carrier recently introduced a twice daily service between London City and both Plymouth and Newquay, competing head-on with First Great Western trains.  The airline says the effect on its Gatwick operation has been minimal, customers from the south west sometimes using one service out and the other back.  Passenger figures are good and a third service is being considered. www.airsouthwest.com