London City in loss of an aircraft 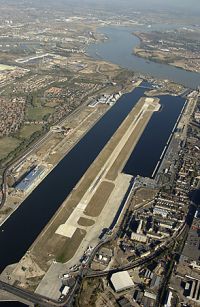 BRITISH AIRWAYS has lost one of its London City Airport-based AVRO RJ100 aircraft used on the Edinburgh (EDI) services.  Following damage caused by a failed nose wheel on landing back in February the aircraft has been withdrawn and dismantled for spares.  BA is to retire the AVRO fleet from October onwards as the new Embraer ‘e series’ aircraft begin to arrive.  In the meantime the loss of the aircraft will lead to 25 job cuts at BA Cityflyer which the company said it hoped to achieve through voluntary means.  The LCY-EDI frequency will be reduced from eight to six return flights weekdaily. Our photograph by, Mark Wagner, was taken before five new aircraft parking stands were added over the water. www.aviation-images.com  www.ba.com www.lcy.co.uk