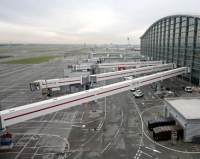 A four-month trial that will make it easier for airlines to use Heathrow’s two runways simultaneously has begun.  Previously each of the parallel runways were restricted to take-off or landing, switching each afternoon.

One of the benefits is that congestion at the airport will be reduced meaning fewer late-running flights after 22:30 GMT.  With a smoother landing (and take-off) pattern the overall working of airline schedules and time keeping should improve, reducing holding both in the air and taxiing with the resultant lower emissions.  Overall noise should be reduced too.

BAA noted that Heathrow flights remain capped at 480,000 aircraft movements a year.  At the present time the average arrival delay is 12 minutes.

The first trial finishes on 29 February while the second will run from 1 July 2012 until 30 September – coinciding with the London Olympics.  The Civil Aviation Authority is monitoring the results on behalf of the Department for Transport. www.baa.com