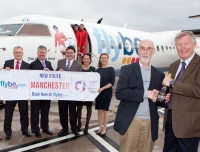 Flybe managed to persuade Manchester United’s legendary Scottish manager to kick off the airline’s new all the year around service from Manchester to Knock in the west of Ireland, last week.  The airline specially used its Bombardier Q400 named after Ireland’s greatest footballer George Best for the inaugural service.

From Manchester Flybe offers over 40 destinations, many of which connect both ways with the Knock services.  In the island of Ireland the carrier also serves Belfast City Airport.  Flight time is around 70 minutes and the service initially operates on Sunday only, but is expected to go up to three times per week in the New Year.  The route opens up opportunities for people from the North West, and wider Europe, to take advantage of Western Ireland’s spectacular scenery and rich history that includes the world-famous Knock Shrine. www.flybe.com