China gets its first Rolls-Royce Airbus A380 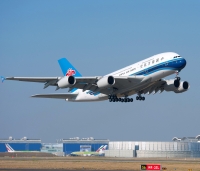 Rolls-Royce was the engine supplier as China Southern Airlines, the Guangzhou-based world’s third largest air carrier, took delivery of the first of five Airbus A380s it has on order.  Rolls-Royce was quick to point out that its engine, the Trent 900, has been selected by 11 out of 16 operators globally, seven out of eight operators in Asia and has been the choice of all A380 customers who have made their engine selection decision this year.  The plane will be operated initially on domestic routes between the major Chinese cities of Beijing, Shanghai and Guangzhou.

At a ceremony in Toulouse, China Southern unveiled its A380 cabin, featuring a total of 506 seats in a three-class configuration, including eight luxury First Class suites, 70 lie-flat Business Class seats and 428 Economy Class seats.

Since entering service in 2007 the A380 has exceeded all expectations, carrying some 16m passengers up to date. The spacious quieter cabin and the smooth ride have made the aircraft a favourite with passengers.  This has resulted in higher than average load factors and increased profitability.  Typically seating 525 passengers in a three-class layout, the A380 is capable of flying 8,300nm (15,300kl). www.rolls-royce.com