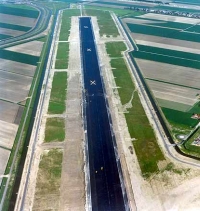 A German court last week banned night flights at Frankfurt Airport after complaints from residents, dealing a blow to cargo and passenger operations as Germany's largest airport opened its forth runway.

The administrative supreme court of Hesse said that the ban would start on 30 October with the new winter flight schedule, drawing consternation from German airlines at the lack of time in which to alter internationally agreed flight schedules.

"To implement such a ban at short notice will have significant economic consequences," a spokesman for Frankfurt-based Lufthansa said.

The ban coincided with the first official landing on the new runway by German Chancellor, Angela Merkel, whose government plane touched down for the ceremonies.  The airport says the facility, parallel to two existing ones but about a mile away, will boost capacity by 50%, from 83 takeoffs and landings per hour to a potential 126, and from the current 53m passengers a year to 88.6m by 2020.  Heathrow is expected to move around 66m this year. www.fraport.de