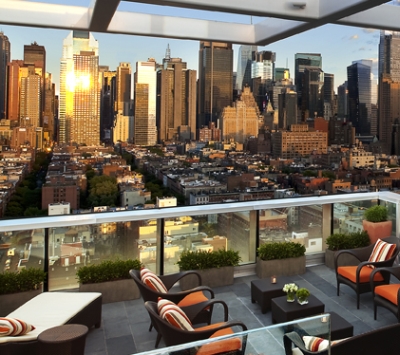 Figures published by Hotels.com Hotel Price Index for the first six months of the year show that New York is still the favourite travel destination for UK travellers despite the average hotel room price in the city hitting £160.  Of course you can stay for a lot less, and a great deal more.

With that in mind, and World Travel Market starting Monday 7 November, AERBT thought it important to take a look at Big Apple,  Contributing Editor Jane Stanbury offering the following and Editor in Chief Malcolm Ginsberg himself finding his way across the Atlantic just before Christmas for a 2012 New York preview that readers will see early next year.

“Live like a local” says the lift notice, wise words as exploring the city as an alternative tourist has to be one of the best ways to experience New York.  Situated at 11th Avenue and 48th Street, this former printing press is one of the latest additions to New York’s hip hotels.  Part of the expanding Kimpton Group which features boutique hotels in 23 cities across the USA, Kimpton has applied their re-use policy and stayed loyal to its print past.  Spa treatments are named after type fonts – and the hotel logo is “Make your Mark”. Its hip roof bar is known as the Press Lounge and has quite possibly one of the best views in Manhattan with the Hudson to the left and Times Square to the right.  Print Restaurant serves modern American cuisine, and Felip the manager takes the legendary New York service standards to a different level as he actually seems to care about whether you are having a good time.  Rooms by NY standards are expansive with two double beds, a couch and a bathroom with large wet room shower the norm.  Swinging a cat is perfectly possible unlike many of the central mid-town trendy hotels. 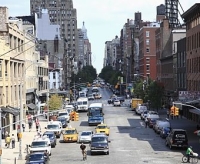 Eleventh Avenue is better known for its car dealerships that extend up from Hells Kitchen, but like elsewhere on the New York skyline the landscape is changing.  Eleventh Avenue is beginning to satisfy the growing trend for modern, luxury apartments.  Enticing ultra high net-worths to this neighbourhood these desirable abodes feature private gyms, cinemas available only to occupants and shuttle buses to the heart of Manhattan, or down to Wall Street – the nearest subway is a three-block walk away.  The post-industrial landscape is gradually being populated by trendy galleries, stylish eateries and chic bars.  Ink stands alone however as the coolest hotel on the West side.

Just behind the hotel is Manhattan’s Cruise Terminal which welcomes a whole host of cruise liners, heading to and from the Caribbean, or further afield to Europe.  The hotel is often busy with guests who are choosing to extend their cruise trip and with media agency Ogilvy just opposite a mixed clientele creates a lively atmosphere.

Ink 48 is also the perfect place to experience New York like a local as the vicinity still belongs to New Yorkers.  Visitors can soak up the Sunday Brunch atmosphere offered by nearby 9th Avenue.  Visit Renaissance at 9th and 52nd where the slightly shabby informal diner serves great American brunches from a vast eight-page menu as cosmopolitan as the clientele.  Alternatively head to 24-hour Moonstruck at 9th and 23rd where the 1930s décor transports you to times past as you tuck into corn beef hash or Americanised Italian standards whilst sipping a martini and making the most of the free wi-fi.  If you don’t like what you see on the menu, then do what the locals do and customise your meal, anything is pretty much possible. 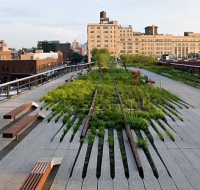 Moonstruck is also a great place from which to begin a walk along New York’s latest attraction – The High Line which runs from Gansevoort Street in the Meat-packing District to West 34th Street, between 10th and 11th Avenues. The High Line was built in the 1930s and raised freight traffic 30 feet in the air.  Trains stopped running in 1980 and Friends of the High Line, a community-based non-profit group, formed in 1999 when the historic structure was under threat of demolition.  Working in partnership with the City of New York and landscape architects James Corner Field Operations, with architects Diller Scofidio + Renfro, they created the raised park.  The walkway features talking water fountains extolling the virtue of re-hydration, a selection of foliage, grasses and plants and seating areas framed by stainless steel, and modern lighting.  Whilst those living in the apartments at eye level are now struggling for privacy, for many New Yorkers and visitors this beautiful walk brings a little calm and peace to the bustle of the city.

At the end of the High Line jump on a 10 bus to the Lincoln Centre which stretches across 16.3 acres on Manhattan and offers the full range of culture.  Attend a magnificent concert from the celebrated New York Philharmonic, take in the sublime music of the Met Opera or take advantage of the expanding offering of free concerts promoted at the David Rubenstein building.  October saw a weekly performance by a number of musicians from Mali, including Sidi Touré, Ali Farka Touré’s heir apparent, and exemplifies the centre’s aims to bring an international flavour and cultural celebration to the audiences. 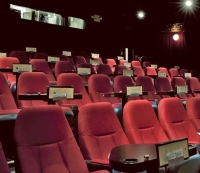 No NY trip is complete without a trip to the dinner and movies. The Nitehawk Theatre has evolved the concept and features a system of seats arranged in pairs with tables enabling you to eat and watch a movie at the same time. Michelin-starred Saul Bolton heads the menu.  Food ranges from meaty fish tacos to concession inspired staples such as popcorn tossed in Parmesan.  Brunch, the classic NY weekend meal, is also available with a movie at the weekends.  As yet Nitehawk does not hold an alcohol licence but this in no way distracts from this unique experience.  Slurping is allowed, talking is not.  If this does not appeal take in a film at a Clearview cinema which is putting the humanity back into movie going.  Polite service and an option to donate your ticket change to that week’s preferred charity, a human being who comes out front to welcome you and politely request you to switch off mobiles (none rang whilst we watched our film) and on departure ushers thank you for attending and offer you a goodbye candy of one sort or another. It is a far cry from the anonymous multiplexes occupying Europe.

Having lived in NY for over two years and not having visited for ten I was apprehensive post 9/11 that the magic, vibrancy and joy that produces one of the best cities on the planet would have gone.  Not the case at all, living like a local is still a possibility whether you are a visitor, or an ex-neighbourhood resident taking it all in again.