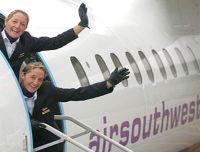 Plymouth Airport saw the end of Air Southwest last Friday (30 September), born out of wedlock perhaps, from the remains of Brymon Airways and now joining the once thriving carrier at the great hangar in the sky.  Plymouth, the largest city in the South West, now has no scheduled air services and seems to have taken yet another move towards oblivion.  Its soccer team props up all four English Leagues, and the  harbour, perhaps the greatest in the land, is for some reason scorned by cruise ships whilst less attractive ports prosper.

Plymouth City Airport was officially opened in July 1931 by the Prince of Wales, little more than a grass strip.  The embryo Brymon Airways arrived in 1972, owned by Bill Bryce.  Under Bryce’s energetic management the airport developed and introduced the first services to Heathrow in 1981 but he had overreached himself and by 1983 former BA Director Charles Stuart was installed as Chief Executive.  Brymon pioneered London City Airport with a rejuvenated Plymouth as the prototype.  In 2003 Sutton Harbour Plc acquired the airport and set up Air Southwest, selling out the airline in 2011 to Eastern Airways who subsequently closed the operation. www.airsouthwest.com  www.plymouthairport.com