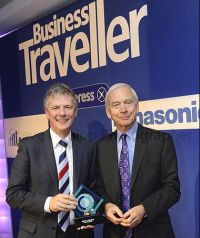 British Airways was the 'Airline of the Year' at the Business Traveller Awards 2011 held at Kensington’s Royal Garden Hotel and presented by radio presenter John Humphrys last week.

Sponsored by Heathrow Express and supported by Panasonic Avionics and Aeromobile, the awards have been a fixture in the business travel and hospitality calendar for more than 25 years.