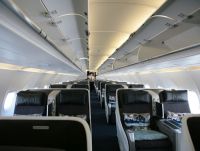 British Airways has celebrated the second anniversary of its unique Business Class-only operation between London City and New York’s JFK airports.  Launched in the middle of a deep recession, the service has defied sceptics to win over business travellers flying between two of the world’s largest financial centres.

The airline’s confidence coincides with the announcement of a seven-year deal with Iberia to maintain the CFM engines on the Airbus A318 aircraft used for the services.  London City is British Airways only A318 operation.  Also new is the offer for every passenger of a 64GB iPad, enabling them to watch bespoke in-flight entertainment programme. Pursers on board are getting iPads too. (see AERBT 26 September).

The Airbus A318 aircraft operate with a maximum of 32 fully flat seats and offers customers 15-minute check-in to departure and US customs clearance in Shannon (Ireland), where the flight stops westward for a brief refuelling.  Inbound passengers can be airside in the terminal within 10 minutes of actually landing, impossible at Heathrow or Kennedy. www.ba.com