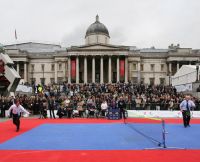 Mayor of London, Boris Johnson, has unveiled a new website which, although designed for the capital’s small and medium enterprises to avoid transport disruption during next year's Olympic Games does actually work for everyone.  The function of the ‘one stop shop’ is to help businesses plan ahead and manage transport impact during summer of 2012.  Information showing how the busiest stations and locations across the Tube and road networks will be affected during the Games is shown with the promise of further comprehensive information to come.

London’s Transport Commissioner, Peter Hendy, struck a cautionary note: “Our analysis shows that no two days will be the same during the London 2012 Games.”

The public transport data, full details of which are due to be released in November, will show how services on all Tube, DLR, London Overground and key National Rail stations are expected to be affected on a line-by-line, day-by-day basis during the Games, in intervals of 30 minutes.  Preliminary information for London’s road hotspot locations, based on recent highways modelling is due to be released in November. www.tfl.gov.uk/2012