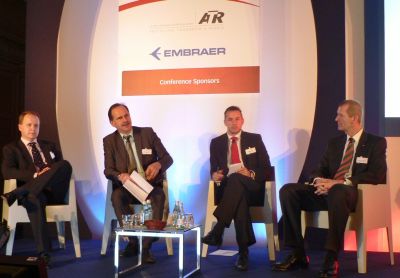 Some 160 delegates from the European Regions Airline Association (ERA) gathered in sunny Valetta (Malta) earlier this month to debate some serious industry issues.

High on the agenda was EU261 “the most inept piece of legislation ever known,” and the threat of criminalisation of accidents – an unwelcome new concern for airline directors and post holders who already take their duty of care seriously.

On a positive note, in the past 12 months in which the industry has suffered Icelandic ash cloud, snow closures at airports and air traffic control strikes, Director General Mike Ambrose disclosed its 70-airline members recorded an average 2.5% scheduled passenger growth in 2010, and the highest passenger load factor on record of 66.2%.  “These figures demonstrate the remarkable resilience and flexibility of intra-European airlines to respond swiftly and strategically to changing markets,” he said.  The overall theme at the meeting was one of ‘cautious optimism’ for the future, for while demand may be gradually recovering, yield remains low and European air transport recovery lags behind the rest of the world.

Airline bosses heard that despite the sterling efforts of ERA’s legal partner Gates and Partners, the chances of getting compensation for the hefty costs incurred as a result of the volcanic ash cloud are ‘not particularly high.’  Another mounting industry concern is the hike in oil price.  “We’ve just had to re-forecast a further £300,000 in March to cover rising fuel costs – to £900,000, up from £600,000 in February,” said Aurigny CEO Malcolm Hart.  The total annual bill is estimated at £3.6m for an operator which flies ATRs and Trislander aircraft, and just when Aurigny was enjoying an especially strong first quarter.  As a result it has just announced a £2 fuel surcharge on ticket prices.  “Our travellers in Guernsey understand and appreciate the transparency.  Most of them rely on oil to heat their homes,” Hart said.

Hart is a strong advocate of ERA’s spring meetings.  “They can be even more useful than the main autumn general assembly, being smaller and more contained.”

ERA is valuable for networking

Jerry Froggett, Commercial Manager at ScotAirways, agrees.  With its six strong Dornier 328s it has access to, in one (very pleasant) venue, airlines who may need extra wet-lease capacity for the summer or other urgent ad hoc sub charter requirements.  For others, such as Switzerland's SkyWork Airlines it was an opportunity to talk with the OEMs as it starts to ponder jet types.  And for airports, such as new members Oxford and Cambridge Airports, the chance to offer a new proposition from the overcrowded big hub airports where slots are near now impossible.  Networking is the name of the game.

Aircraft broker members Toulouse-based Prisma Aviation and Skyworld Aviation were busy discussing an agreement to team up on selling some BAE Avro RJ jets – subsequently ratified – while Denmark and Ireland-based leasing organisation Nordic Aviation Capital brought a team of six and hired a dedicated business room at the Westin Dragonara venue to meet with attending airlines.

Delegates listened to a variety of presentations including the value of social media, airport security and future travel.  There was a session on in-flight health.  Passengers risk being hypoxic in-flight and baggage is actually becoming a health issue, according to MedAire Chairman Joan Sullivan Garrett, with passengers carrying baggage that is too heavy for them.  Airlines also had an opportunity to debate with European Commission Director Marjeta Jager who invited them to “come and see the struggles we have in designing legislation.”  Responding to accusations about air transport being discriminated against in regard to EU261/passenger compensation and the call for reform she insisted that the EC is trying to address the shortcomings in passenger rights legislation in all modes of transport.

“Observing brand loyalty does not exist anymore, social media is growing in importance as a key marketing tool to communicate with your customers”, said Ian Murray of Discovertheworld.com.  Yet only 28 ERA members have Facebook, four have a You Tube channel and 13 use Twitter.  Used in a fully integrated way they are all, ideal platforms to engage with an audience, delegates heard.

London City Airport (LCY) used Twitter when it encountered severe snow disruption earlier in the year.  “We tweeted 100 updates and got complimentary tweets back,” said Bernard Lavelle, Sales Director.  He noted the airport recently undertook a survey via Linkedin Aviation forums to gauge what travellers want.  “Wi-fi, free and everywhere” was the most popular request.  So were power sockets, which LCY has in abundance.  He commented that the airport has just moved to a new food and beverage supplier which is providing beers from local East End breweries, picking up on Murray’s other advice to “expand your brand locally”.  Engaging with the community was another point of discussion.  London City hosts an annual public day every summer – on a Saturday when the airport is closed for traffic.  Munich Airport transforms its terminal into a Christmas market, beach volleyball party and even a polo tournament for the public.

Last year Munich connected 115,501 transfer passengers – a 99% success rate, according to Andreas von Puttkamer, Senior VP Aviation, 37% of traffic at both Terminals 1 and 2.  The airport, which consistently wins awards, is a strong advocate of social media, boasting 5,507 fans on Facebook and 1,910 on Twitter.  It used it to promote new initiatives such as a new VIP wing covering over 1,200sq m opening in June that all airline passengers, in whatever class of travel, can enjoy.

In a session on future travel Mike Robinson, Assistant Director at IATA Consulting, said that by 2020 80% of airline customers will be offered a complete full service suite based on industry standards, yet some 30% of air travellers in Europe are still to be convinced of the full service options.  A total 70% would tag their own bags; 74% would print bag tags remotely and 70% would use automatic boarding gates, according to SITA.  Today, 70% of travellers regularly use kiosks, 60% internet and 23% are using mobile phone for check-in.  And with a raising increase of Smartphone users, SITA’s Nigel Pickford stated that passengers are ready to use it “at all stages of their journey.”

Matthew Finn, Managing Director of Switzerland’s Augmentiq, talking about this thorny subject highlighted that "Events in the past decade have taught us that security threats have changed, acts of unlawful interference have evolved ... and we can simply no longer afford to concentrate our limited resources on detecting metals and prohibited items."

Airports don’t 'touch' passengers often but it really helps that when they do they do it with a smile – such as reading their name from the boarding card, commented Bernard Lavelle.  The smiles, however, were not in evidence on the journey back through passport control at London Heathrow's T4.  A clear case of “could do better!”

ERA’s annual General Assembly will be held in Rome during 28-30 September. www.eraa.org