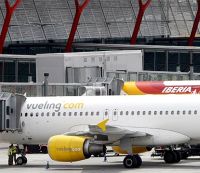 Iberia’s routes from Madrid to Alicante, Fuerteventura, Lanzarote and Malaga are being operated by Vueling this summer, at least until the end of October when the airline season changes.  The arrangement includes code shares with a number of other carriers including Avianca, British Airways and LAN.

Iberia says that with its own expansion, particularly to South America, it has a shortage of aircrew.

Vueling posted a net profit of €46m for 2010, a 66% increase on the €27.8m it earned in 2009 following its merger with Clickair making it one of the most profitable airlines in Europe.  The airline says this is due to its focussing on its cost keeping and being imaginative marketing wise with its through ticket/connecting flight arrangement being an example.  This is being extended to Iberia long haul flights out of Barcelona and Madrid, passengers interlining from Iberia gaining priority.  The airline also offers seat reservations with the first three rows 2+2.  Passengers pay €30 to have the centre seat left free. www.vueling.com