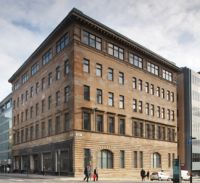 InterContinental Hotels Group (IHG) has opened its third boutique Hotel Indigo in the UK, the 95-room Hotel Indigo Glasgow.  The central Glasgow property joins the two existing hotels in Britain, both in London, at Paddington and Tower Hill.  These will be followed shortly with a Liverpool opening in June this year followed by Edinburgh, Birmingham and Newcastle sites in 2012.

Hotel Indigo was launched in the United States in 2004 making it IHG’s youngest brand.  There are 38 Hotel Indigo properties around the world and 62 in the development pipeline, which will open in the next two to three years.

The Hotel Indigo Glasgow has been converted from industrial office premises. The historic building was originally Glasgow’s first power station and was used to illuminate the Glasgow School of Art.  Hotel Indigo standards do not dictate the number or size of rooms in a property, making it ideally suited to a conversion.  These are attractive to developers because they require less financing than new builds and can be up and running in a shorter period of time. www.hotelindigoglasgow.com